On October 29, Ratt frontman Stephen Pearcy joined Sammy Hagar & The Circle on the opening night of their residency at the Strat Hotel, Casino & SkyPod in Las Vegas. They performed the Led Zeppelin classic “Rock And Roll”. A fan filmed video is available below.

Pearcy posted the following message on Instagram here with the photo above.

Hagar recently revealed that he is already planning to continue his residency in the New Year.

“The Strat team was great and they really allowed us to come in and do what we wanted to do,” he says. “This room is awesome and I looked at all the rooms available in Las Vegas. My fans, the Redheads, they come from all over the world and you want them to be in a place like Vegas where they can have a great time before and after the show. The Vegas experience is unlike any other city. If you can’t find something to do here, you’re either broke or in a really bad mood.

Hagar intends to bring in plenty of special musical guests and perform a different set each night at the Strat. “One night we’re going to go out and play Van Halen for an hour and then start picking cherries. Another night we could play Montrose, which will be fun because it’s only 35 minutes of music. I want to do it with a different theme every night and really mix it up. “

Tickets and more information for the Las Vegas Residence here. 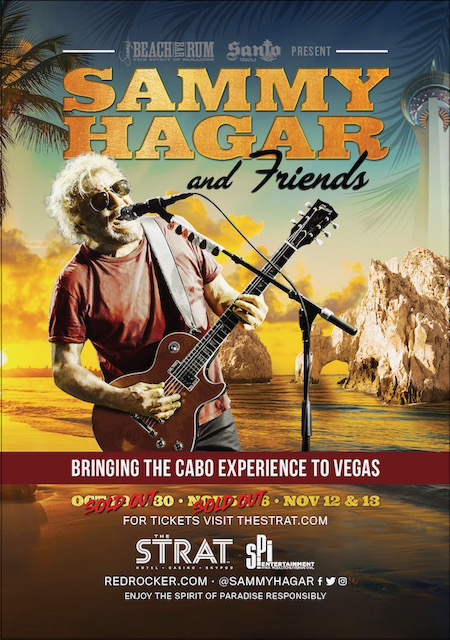 Hagar will bring together a legendary circle of friends and bandmates, past and present, in the intimate Strat Theater with a capacity of 800, including 300 GA tickets for a party atmosphere in front of the stage. Michael Anthony, the legendary bassist who has performed with Hagar for the past 30 years in bands such as Van Halen, Chickenfoot and The Circle, and Vic Johnson, Hagar’s longtime guitar virtuoso and member of The Circle are confirmed for the first four shows. Grammy-acclaimed drummer Jason Bonham and their bandmate in The Circle is confirmed for the first two shows, October 29 and 30, with surprise and special guests to be announced.

The theater will be designed to capture the beach vibe it is synonymous with, including elements of Hagar’s famous Cabo Wabo Cantina in Cabo San Lucas, which is home to its epic annual anniversary.

Fox 5 KVVU was on hand for Hagar’s initial announcement: