“Before the Sky Falls” by Brazilian playwright Christiane Jatahy sends an unambiguous message about the complicity of rich countries, particularly Switzerland, in the destruction of the Amazon. It is also a plea for international pressure on the Bolsonaro government. 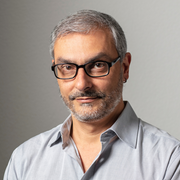 Born in São Paulo, Brazil, editor in the Portuguese department and responsible for swissinfo.ch Culture beat. Graduated in Cinema and Business and Economics, worked at Folha de S. Paulo, one of the main Brazilian dailies, before moving to Switzerland in 2000 as an international correspondent for various Brazilian media. Based in Zurich, Simantob has worked with print and digital media, international documentary film co-productions, visual arts (3.a Bienal da Bahia; Johann Jacobs Museum / Zurique), and was a guest speaker on Transmedia Storytelling at the Lucerne University of Application. Sciences and Arts (HSLU – Camera Arts, 2013-17).

More from this author | Portuguese Department

It was a fateful coincidence. Jatahy’s new play premiered at the Schauspielhaus theaterExternal link in Zurich on the same day the Brazilian Senate released a damning report on Brazilian President Jair Bolsonaro’s handling of the Covid-19 pandemic, indicting more than 70 members of the administration. The president himself is accused of nine crimes, including crimes against humanity.

On the Zurich stage, five costumed white men celebrate a $ 3 billion contract with copious amounts of alcohol, hinting at an undefined trade deal that could be linked to logging, gold mining or mining. ‘agro industry.

Shakespeare in the Jungle

The text is a free adaptation of Shakespeare’s Macbeth with excerpts from Davi Kopenawa’s book “A Queda do Céu” (The Falling SkyExternal link). Kopenawa, an indigenous Yanomami leader, was also present at the premiere, as part of a vast program to raise awareness of the plight of the indigenous peoples of Brazil with European institutions and the United Nations in Geneva.

Jatahy also inserted public statements from Bolsonaro and phrases from a cabinet meeting in 2020 that went viral on social media. “This is not a conspiracy theory, these are the facts, shown even in a leaked video of a cabinet meetingExternal link where the Minister of the Environment [Ricardo Salles, a notorious “enemy” of the forests and the indigenous populations] asks the president to take advantage of the attention drawn by the pandemic to continue destroying the forest, ”Jatahy explains.

The director insists that the play is a manifesto, a call for help from the international community, to raise awareness of the general catastrophe underway in Brazil. “My work has always been political, but after the dismissal of former President Dilma Roussef in 2016, this act of denunciation has become a necessity,” explains Jatahy. “The political aspect affects us as citizens, of course, but it seriously compromises our future, and not only in Brazil. The destruction of the Amazon is a global concern, ”she adds.

On the eve of COP 26, it is surprising that there is hardly any kind of significant international pressure on Bolsonaro’s government. His presidency has validated record levels of deforestation. He has eclipsed the penal code and constitution almost daily since his election (and many other times before that) after getting out of the woods without a single slap on the wrist. His family’s ties to organized crime, paramilitaries and corruption schemes abound.

“Bolsonaro, however, is just the clown. It’s the whole system that needs to be changed,” Jatahy told SWI swissinfo.ch on the eve of the premiere in Zurich. In fact, Bolsonaro works the same way. that Donald Trump, the former US president, used to distract the public’s attention as strings are pulled in the background by various interest groups who form his base of support.

This adds to an already fragile democratic environment. Since Roussef’s dismissal, between 6,200 and 13,500 retired and active military officers have held civilian positions in the federal government and state-owned enterprises (figures vary depending on the source). Fourteen of the 17 generals of the army staff in 2016 occupy key positions in the administration.

Bolsonaro, however, is doing everything he promised during his presidential campaign: dilute labor rights and pensions, dismantle all federal cultural and artistic institutions, ignore minorities, remove gun controls, and even dismantle them. paltry environmental monitoring and enforcement agencies, leaving the public the native lands and reserves are easy prey for loggers, miners and land grabs.

“It is important to raise awareness that international pressure is for the moment the only hope to reverse this destructive dynamic that we are currently experiencing in Brazil in many aspects, especially in the Amazon – but not only,” she said. “There are many parties involved in illegal logging and mining, but this chain goes way beyond borders. This certainly explains why the international reaction is so restrained. Illegally mined gold, for example, is exported and “cleaned” in the rich world, especially in Switzerland, “Jatahy recalls.

Arts and culture are a main target of Bolsonaro’s policies. In fact, he based his campaign and populist appeal on the escalation of so-called “culture wars”, betting on radicalization. “It is not only the forest that burns, but also our cultural institutions and the memory of the country. And I mean literally burn. Since his election, two main cultural institutions, the National Museum and the National Film Archives (Cinemateca), have been destroyed by fire, ”Jatahy explains.

In this context, with the pandemic, the artistic class is faced with an existential challenge never seen during the last military dictatorship (1964-85). “There is no longer a need for censorship,” she said. “They are simply dismantling the mechanisms that support artistic creation and cutting off all funding. “

Back in Zurich, Macbeth’s connection to Bolsonaro can seem a bit far-fetched at times, but a prophecy in the fourth act of Shakespeare’s play, often repeated in Before the Sky Falls, sounds ominous:

“Macbeth will never be defeated, until
From the great wood of Birnam to the high hill of Dunsinane
will come against him. “

In other words: the tyrant will never be defeated until the forest marches against him. Macbeth in turn frowns at his omen – “It never will be,” he said. Bolsonaro also challenged his fate, saying he would only leave office “dead, arrested or victorious”; a very Shakespearean line for someone who is proud of his anti-intellectual stance and probably hasn’t read Shakespeare.

Born in Rio de Janeiro, Christiane Jatahy is an associate artist at the Odeon-Théâtre de l’Europe (Paris), at the Schauspielhaus Zürich, at the Arts Emerson Boston and at the Piccolo Teatro in Milano. “Before the Sky Falls” is the second installment in his horror trilogy. The first, “Between dog and wolf”, after “Dogville” by Lars von Triers, deals with the mechanisms of fascism. The third installment, “After the Silence”, is produced in Rio and explores the problems of slavery and its consequences on structural racism.